Glyn.in (pronounced glee-ning) is a mobile app to capture and annotate work processes, and to discuss and decide on aspects of these processes that could be improved. The idea is to use the app in conjunction with innovation games, a special kind of participatory workshop that helps organisations all over the world to collaborate with customers on improving their products and services. Glyn.in draws on the power of Podio, a flexible team collaboration platform, to organise participants and share content, and uses the Evernote and Auphonic APIs to capture text and voice.

In this problem-based learning project, we have teamed up with BauABC, a large vocational training centre in building and construction (see figure below), and want to use Glean.ly and the innovation games to facilitate the process of transforming informal learning experiences in vocational training centers into opportunities for product and process innovation at the workplace. By going mobile, we are trying to bring the messy setting of the workplace closer to the innovation games, which happen typically in an office environment. This is an ambitious objective, and this explorative project is is a first step to provide us with a more solid basis for a future implementation of innovation games as a service at BauABC.

Functionalities and /or technical level

Glyn.in allows users to capture pictures and annotate them with text and audio recordings. The timestamped pictures with together with the annotations can be stored on Evernote and in Podio, where they are assigned to a particular group of users participating in an innovation game. The social media features of Podio allow participants to discuss anything that has been stored on Podio. In the next version, users can select a spot on a photo and link annotations directly to it. Photos and annotations can be organised and represented in different ways, including on a timeline.

Screenshots of the paper prototype

We have created a clickable prototype with the POP App (POP = prototyping on paper). Here a couple of screenshots. 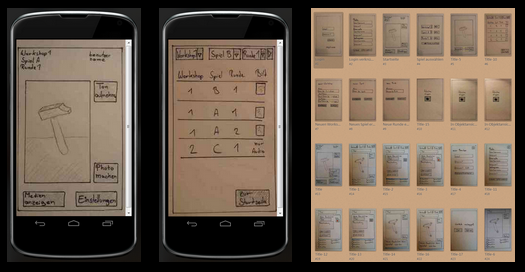 Project partners: CIMNE and Innovation Performance from the Learning Layers project as the clients. A student team from Karlsruhe University of Applied Sciences (business information systems).

View all posts by Gilbert Peffer →

The ODL is a collaborative space that captures the design-based research process followed in Learning Layers. It is the site where the project shares the main results from our systematic approach towards designing, developing and evaluating Learning Layers interventions and solutions for complex problems in Health and Construction practices.